Amy Chua’s book, Battle Hymn of the Tiger Mom is generating a lot of heated discussion among parents. So much so, it was recently featured in Time Magazine. Whether you agree with her view or not, I hope you appreciate the fact that Ms. Chua has surfaced an issue that requires our attention. 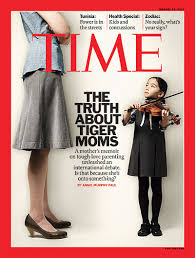 I think the heated controversy is a result of people feeling insecure about their child-rearing. Let’s face it, as a society we are not doing so well. If we are honest and mature enough to face facts, we have to admit that we have failed our young people.

What are the facts?  The leading cause of death is motor accidents (primarily drunk driving). Alcohol consumption among our young people is an indication of the need for them to escape.The second leading cause of death among teenagers is suicide. Think about that. Young people, with their whole lives ahead of them are in such pain that they seek a permanent escape.These powerful stats don’t begin to tell half the story. I could go on and quote drug abuse, violence among teens, sexually transmitted diseases, depression and a myriad of other ailments. On top of all of this, teens are not safe in their own homes. A recent news story is about Julie K. Schenecker who shot her 13 and 16 year old children to death because she thought they were “mouthy”. While this extreme form of violence is rare, child abuse is not. Laurence Steinberg, the Distinguished University Professor of Psychology at Temple University, said this in his column:

According to the most recent statistics from the U.S. Department of Health and Human Services, some 30% of all victims of physical abuse are adolescents. Young adolescents — those between 12 and 15 — are especially likely to be targets, with more than 25,000 official cases of physical abuse in this age group reported annually.

If our childrearing worked, we would have teenagers who are full of hope and a great sense of wonder. And we would be filled with admiration when we think of our teens. Instead, we have teens who have seen it all and done it all and who are bored with life and each other and who often bring out the worst in parents.

While the controversy over Ms. Chua’s book continues to rage with no clear answer on what is right or wrong, for those of us who are Christians, we needn’t be confused. We have a very public example of the consequences of poor child rearing in the pages of the Bible. I am speaking of King David, who was the greatest king of Israel but a very poor father. The lesson of his childrearing is simple, we cannot protect our children from their poor character.

David’s approach to child-rearing was not unlike the “modern” approach. It is encapsulated in the 6th verse of 1 Kings 1:

1Kings 1:6 And his father had not displeased him at any time in saying, Why hast thou done so? and he also was a very goodly man; and his mother bare him after Absalom.

David was a permissive parent. He chose to never contradict his sons. Amy Chua, in defense of her mother in her article, Why Chinese Mothers Are Superior, says,

“What Chinese parents understand is that nothing is fun until you’re good at it. To get good at anything you have to work, and children on their own never want to work, which is why it is crucial to override their preferences. This often requires fortitude on the part of the parents because the child will resist; things are always hardest at the beginning, which is where Western parents tend to give up.”

Discipline develops character. A child is not naturally disciplined. As parents, the discipline that we instill eventually becomes self-discipline.

What was the outcome of David’s method of childrearing? Two of David’s sons were put to death because of their poor character. In fact, prior to King Solomon putting Adonijah to death, he made the statement:

1 Kings 1:52 And Solomon said, If he will shew himself a worthy man, there shall not an hair of him fall to the earth: but if wickedness shall be found in him, he shall die.

Adonijah’s fate was in his own hands. If he had good character, he would have lived. Unfortunately, Adonijah’s character was set by King David’s permissive parenting.

As parents we have to realize that character is destiny. We need to realize that letting a child have his or her own way all the time is not love. Love focuses on long-term well-being not short-term pleasure. In this respect, Amy Chua is much more in line with God’s word than the permissive social scientists who would have us molly coddle our children in the name of “protecting their self-esteem.”